This letter may not be for the faint of heart or the young.  So please practice your parental duty and screen it before you shatter any innocence.  Also,  we apologize for our bad prose, but we had loads of fun creating this.

Twas the Night Before Christmas, when all through the house,
not a creature was stirring, not even a mouse.
The stockings were hung by the chimney with care,
in hopes that St. Nicholas soon would be there.

The children were nestled all snug in their beds,
while visions of video games danced in their heads.
And Laurel in her nightie and I in the buff,
were just nestling down for a frisky winters nap.

When up at the pub there arose such a clatter,
I sprang from the bed to see what was the matter.
Away to the window I flew like a flash,
there is a sleigh on the roof, Saint Nicks in the stash!

To the Brewery I flew, to look in the door,
I quickly snuck in and put my cold feet on the warm heated floor.
When, what to my wondering eyes should appear,
but a little old man with a mug full of beer.

Hey! I explained, if you would like to try more,
I have ciders and meads and hot spiced wines galore.
So we pulled up some chairs and we settled ourselves to the bar,
and I heard him explain, this could well be a long night.

Meanwhile the phone rings at 2:30 at night.
A stern voice inquires Is this the Glewwes?  Are you all right?
Yes, said the wife in her half hazy slumber.
To which his concern turned into an accusatory stammer.

We have been tracking St Nick on our high priced Doppler,
and noticed he has not progressed for the past 2 hours!
There are children around the world who will be deeply distressed
if they wake Christmas morning, and find no presents.

Let me check on the problem she promised and pleaded,
but whom may I say has awoke me at this hour?
Let us just say that our duty to our country
here at this silo, is to serve and protect, and torture, if needed.

So away into the night she did trudge through the snow,
guided to pub by the windows lights glow.
Bursting through the door, she observe two men with red noses practicing
Merry Christmas to All and to all a good night!

No! she exclaimed.  There are children with big expectations
and men with missiles who want the big guy to move on.
So we got him onto his feet, rolled him into his sleigh.
We slapped the Reindeer asses and sent him on his way.

As we prayed he wouldnt fall out,
and wondered what he left for us,
we heard the jolly ol man exclaim,
Merry Christmas to all and ... well be back tomorrow night!

Ok, let me clarify... the above is the sole product of Mark.  {Oh really!  I seem to remember she had the idea and wrote the first draft.  I just fixed the spelling. -mdg}  I had very little to do with the above creation.  {See!  She is already admitting being involved.}  The following is more my Christmas letter.

This time of year finds us all healthy.  Diana is still working in Chicago and loving it much to my dismay.  I would love to have her closer to home.  Erik is still going to school studying for a major in engineering.  He has now completed his general educational classes at Normandale and wants to go back to U of MN for the last year and half.

Mark still is working at Goodrich.  He has a patent pending now for power distribution thing for aircraft.

As for the brewery, its popularity continues to amaze us.  We were surprised by the Metro Magazine doing a story on the Glewwe Castle Brewery in the September issue comparing us to Dorothys, 1919 and other Minnesota made root beers.  We rated most flavorful.  We were flattered by the publicly and the amount of calls were surprising.  If you are interested, search on Root Beer Glewwes at www.metromag.com/,  the article is called Roll Out the Barrel

We did the Prior Lake Farmers Market again this year and we also opened a second market in Eagan, MN.  Marks dad, Carl, joined us to make it truly a family affair selling root beer as good as grandpa remembers.

As for me, I had fun this year being a part of the Democratic Party as a delegate for my area.  Got to see just how the process works.  It was fun.  I continue to work at MinnPar as their Human Resources Manager.

As for other fun things we did this year ...Marks dad, Carl, Mark and I took a trip to see Carls Brother, Howard and Wife, Lea in Nashville, TN.  Had a great time and I got to go to Country Music Hall of Fame, a Civil War landmark, and the home of that famous Democrat Andrew Jackson.  It was great!

Our next trip was the first part of October to Litiz, Pennsylvania for their annual Wilber Chocolate Walk.  This one I recommend to anyone who loves chocolate.  28 chocolatiers stationed throughout the small town of Litiz giving out samples of chocolate creations for 6 hours.  Thought I died and went to chocolate heaven!!!  But by the end, I thought I might really die ... uuuggghh!  I even turned down a chocolate fudge sundae at the end.

All the news from our household.  Hope this finds you all well and happy.  Remember, if you get the opportunity, come see us and sample some of Marks beverages.

Merry Christmas and Happy New Year!
Mark, Laurel and Erik (and Diana who is off-site) 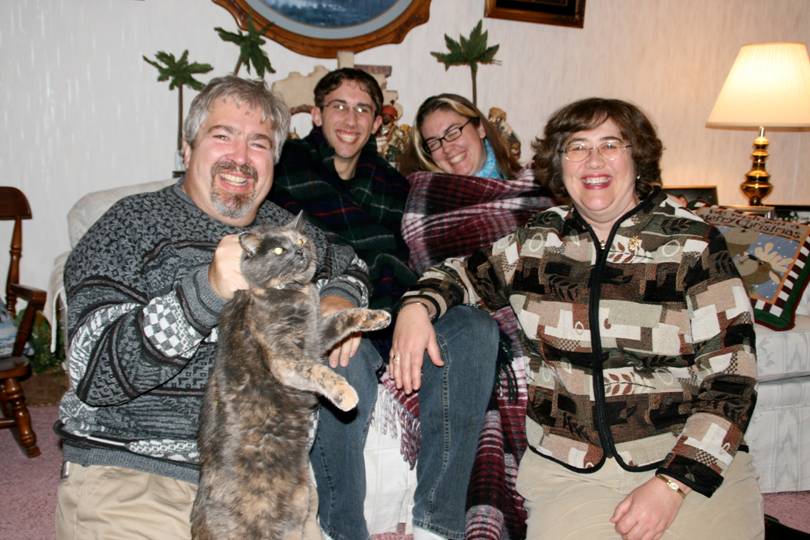 and Shadow says "Hi" too.